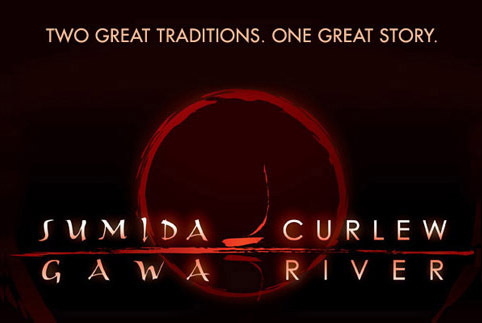 We crossed five centuries and two cultures, and told the story of a woman driven mad by the loss of her child. It was agonizing and beautiful.

Stage direction was by John Wright, scenography by Robert Gardiner, and costume design by Marti Wright. We have posted the 32-page Sumidagawa / Curlew programme book. It was edited by Harvey De Roo and designed by Sandra Hanson.

Inspired by the 15th century Japanese masterwork Sumidagawa, this unique double bill was a Canadian event premiere. It offered gorgeous music, deeply eloquent dance, and a vision of the Vancouver we are becoming.

* Tenor Isaiah Bell, as the Madwoman, sang fervently with a varied palette and much eloquence.

-- Elissa Poole, The Globe and Mail

*What a fantastic show. A delight to see, a delight to hear. Bravo orchestra. In a way, a grim evening, but so powerful that it didn't matter... I am hardly a dance enthusiast, but Sumidagawa worked fabulously, too.

* Juro Motomasa’s Noh play featured the Toronto butoh artist Denise Fujiwara, whose modern performance was freighted with an intense, ritual, hieratic slowness designed as if to delay time down to speeds and meanings beyond temporal reality.

* This was a powerful telling of the story with a uniformly strong cast of singers… A perfect production.

* I enjoyed the performance last Friday night thoroughly, thoroughly, it was a great treat for me – and such inspiration.  Thank you so much.  Seeing the performances of the two artists performing the madwomen was a deeply moving experience – tremendously sad but of such beauty I wished it would never end.  The images are planted deeply into my heart. I am so glad, glad, glad you are doing the work you are doing.

* This is an honest production grappling with a complex and enigmatic work.

* … confident playing from flute, horn and percussion made Britten’s detailed, difficult score shine out with all the pathos and power latent in this remarkable fusion of East and West.

* Tenor Isaiah Bell is up to almost everything Britten throws at him in the pivotal role of the Madwoman, from stark passages with only a glimpse of instrumental support to extravagant descants floating over complex ensemble numbers that mark critical points in the often austere score.

* I almost hesitate to write for fear my words of praise will be inadequate to describe last night's production. I think I should just say it was one of the most powerful, moving experiences I have ever had in the theatre, and I so admire City Opera Vancouver for its vision and courage in staging a presentation that bridged such an enormous cultural gap so successfully.

* Tenor Isaiah Bell as the Madwoman was breathtaking. He sustained an intensity of emotion which never toppled into hysteria. His restrained gestures, like the Madwoman’s simple, haunting curlew motif in the music, slowly built suppressed tension and let Britten’s music work its magic.

This was a co-production of City Opera Vancouver, UBC Theatre & Film, and Blackbird Theatre. It was endorsed by explorASIAN, Nikkei Place, the Japanese Language School and Hall, The Bulletin of the Japanese-Canadian Citizens' Association, the Powell Street Festival, UBC Asian Studies, the UBC Alumni Association, and the Vancouver International Song Institute / VISI. It was sponsored by the many friends of City Opera Vancouver.