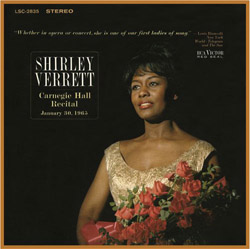 Much about the career of Shirley Verrett (1931-2010) went in unusual directions. She began her career as a mezzo, and ended as a soprano. She was a black woman who demanded attention and respect from a white-dominated world in opera. Born into a strict Seventh Day Adventist family, little about her early ambition was supported by her own people. As for so many African Americans of her generation, only Europe first opened its doors. And, at the end of what became an illustrious life in opera and recital, she moved to Broadway and Rodgers and Hammerstein’s Carousel.

There is a CD, just released, which conveys Verrett at her peak in recital. It is a survey of her work in Schubert, Tchaikovsky, Rachmaninoff, Mozart, Copland and traditional Negro spirituals arranged by the great Hall Johnson and John Jacob Niles. Recorded live on 30 January 1965, with Charles Wadsworth at the piano, she was in her mezzo glory that night. The audience clearly adored her. No wonder.

Her voice had a great richness, refined by a pointed musicianship, one in which nothing was taken for granted. She could cut through any orchestra, and sail above any oasis of quiet. And she had range, such range. It was a famous, although mixed, compliment that she was often referred to as ‘The Black Callas’.

It remains legend that on one occasion, and quoting Anthony Tommasini in the NYT, “In 1973, when the [Met] opened its historic production of Berlioz’s ‘Troyens,’ starring Jon Vickers as Aeneas, Ms. Verrett sang not only the role of Cassandra in Part I of this epic opera, but also Dido in Part II, taking the place of the mezzo-soprano Christa Ludwig, who had withdrawn because of an illness, a tour de force that entered Met annals.” This was Shirley Verrett.

There was another side, and it wore a comic costume. I saw her live at The Met once only, she starring opposite a singer who shall be unnamed. My friend Jean Godden and I dressed up as musicians. I carried an empty viola case, and we sneaked in through the stage door, and watched the show from the third light loft, stage left. What a view.

Unfortunately, this was the notorious event in the two stars were not even on speaking terms. After each ‘duet’, each retired to a separate part of the wing, there to be fanned and reassured by their respective claques. The hapless stage director buzzed back and forth between each, trying to keep their separate camps from exercising some dread option or other. It was possible to see Verrett’s occasional giggle as this silly spectacle proceeded.

This new CD is worth our attention. The rich caress and excellent German of Verrett’s voice makes the Schubert sound as if still wet on the page. So too the American spirituals, sung with belief and faith and respect. It is a pleasure to hear such work treated as inherently worthy, and not merely an occasion to demonstrate progressive credentials. In this, Ms Verrett stood in the great path of Marian Anderson and Mahalia Jackson.

Her Mozart, the evergreen Alleluia K165, is given with a youthful fervour and bright spirit. She is less concerned with making a beautiful noise – that she certainly does – than in conveying the good news of its text.

Only in the Rachmaninoff and Tchaikovsky does she disappoint. Spring Waters, a well-known and much-traversed work, suffers the problem of by-rote diction, and was perhaps a poor choice. Verrett gets away with it because of the drama and allure of the voice, and for that we may be grateful.

As to the rest? Most grateful that there was once such a great and gracious voice.

NEXT: The Miracle of Heifetz →