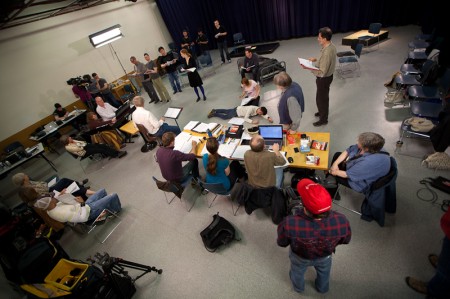 "Fallujah" Rehearsal at the Carnegie Centre, Vancouver, BC.

Two years ago, the Annenberg Foundation gave us $250,000 to create a new opera about the war in Iraq, and about one of its most horrific consequences, PTSD. Many of our own people now returning from Afghanistan are suffering the same nightmares.

Six months ago, they gave us another $100,000 to produce a film about the making of the opera, Fallujah.

Today, we release the 24:00 documentary that has resulted. Made by John Bolton of Vancouver's Opus 59 Films, it is a strong and eloquent telling. It takes us behind the curtains, and inside the hearts, of the people who made this very powerful new chamber opera.

We hope you like it -- and once again thank our friends in Los Angeles for making it all possible. And our artists for making it SO strong, and SO musical.

Two years ago, the Annenberg Foundation of Los Angeles gave us a grant of $250,000. It remains the largest commissioning grant in Canadian history. Two years and four workshops later, Fallujah is born.

With music by Canadian Tobin Stokes, set to a libretto by American Heather Raffo, and inspired by the life and work of Sgt Christian Ellis (USMC, ret’d), Fallujah tells a powerful and deeply moving story.

Fallujah describes two lives – one American, one Iraqi – that intersect with dread consequence at the Battle of Fallujah in 2004. It examines the agonies of guilt and conscience and pride when a warrior returns home.

On 2 July 2012, the Associated Press published worldwide a major feature story on the making and meaning of Fallujah. On the same day, they released an original AP film to their 600 television outlets worldwide. This story has been covered in the major media of North America. Read the AP story.

The Annenberg Foundation and its Explore.org affiliate has begun the release of filmed excerpts from the opera. These brief webisodes will roll out over the summer, and culminate in a documentary going online in early September. They may be followed at explore.org/fallujah. Film materials were produced by John Bolton of Opus 59 Films.

Once again, we thank our friends Charles Annenberg Weingarten, Tom Pollak, and the entire board and staff of the Annenberg Foundation. Their imagination, and generosity, and devotion have made possible the entire enterprise.

We invite you to consider these projects, to watch these films, to read these reports – and to give us your reaction. We can be reached at info@cityoperavancouver.com

We do this work for music, and the story, and for you. We’d like to know what you think.

NEXT: Norman Armour to direct Pauline →