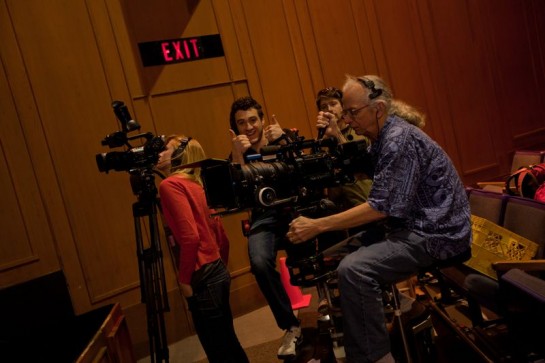 The Annenberg Foundation of Los Angeles has given City Opera $100,000 to make a film documentary about our new chamber opera, FALLUJAH.

This gift is in addition to the $250,000 creation grant from the Foundation that we announced in February of 2011. It remains the largest opera commissioning grant in Canadian history.

"This new grant takes our project another step forward," said City Opera President Dr Nora Kelly. "It takes us into social media and online capacity in a powerful way. It opens new doors. It will make it easier to take our other commissions to wider audiences.

"We are extraordinarily grateful to Explore.org and the Annenberg Foundation for their generosity, their imagination, and their devotion to great storytelling in music," said Kelly.

Excerpts may be seen at www.explore.org/fallujah.

Our films are made on contract with John Bolton and Opus 59 Films of Vancouver, and with the kind permission of the Canadian Federation of Musicians, the Union of BC Performers, and Actors Equity.

On 2 July 2012, the Associated Press filed a major feature story about the making and meaning of our new chamber opera FALLUJAH. On the same day, Explore.org began rolling out a series of brief film trailers and vignettes. They will culminate in an online documentary set for release 11 September 2012.

The AP story was accompanied by a film they made, distributed through the 600 television stations in their system. The story itself has had massive play, appearing in Los Angeles and New York, London and Cairo, Athens and New Delhi and Tokyo.

The music for FALLUJAH is by Canadian Tobin Stokes, its libretto by American Heather Raffo, and the opera inspired by the life and work of Sgt Christian Ellis (USMC, ret'd). John Wright was the workshop director.

We wish we could launch every new opera this way. All thanks to the Annenberg Foundation and Explore.org for making it possible.

And thank you for reading this.