The Emperor of Atlantis 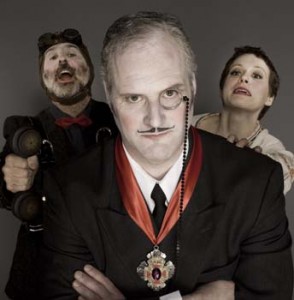 The Emperor of Atlantis closed on 11 February 2009,
after 5 consecutive nights of sold out performances.

Co-presented with the Vancouver Holocaust Education Centre at the Norman Rothstein Theatre, this was the British Columbia premiere of a unique and deeply moving chamber opera by Viktor Ullmann and Petr Kien.

While its score survived, its creators did not. The Nazis shipped its entire company off to Auschwitz. Only its art remained.

The opera speaks both to transformation and recurrence. It speaks from the nadir of the 20th century to the violence and despair of the 21st. Ullmann and Kien, together with their colleagues at Theresienstadt, created a masterwork.

Music direction was by City Opera’s artistic director Charles Barber, with stage direction by Peter Jorgensen, stage and costume design by Marti Wright, and lighting design by Adrian Muir. Serving as stage manager and assistant director was Chris Allan. The opening Prologue, recounting the historical and musical context of this masterpiece, was given by Dr Jaap Hamburger.

Janet Lea was producer and Nora Kelly the associate producer. The Lieutenant-Governor of British Columbia, the Honourable Steven Point, spoke at the opening performance on Sunday February 1, 2009. The Mayor of Vancouver, Gregor Robertson, attended on Saturday 7 February, as did several City Councillors throughout the run.

We have received a great many letters from audience members about the power of this unique work. Below, one you may find of special interest:

Thank you for keeping me on your distribution list. Several friends from San Juan Island and I made it to the Saturday 1/7 performance. You’ve heard it all by now: amazing music, impeccable staging, “Duncan” dancing and costuming, just as a Steiner student might have done it, and on and on.

The “curtain” lecture was so well done that it almost seemed a part of the production, and helped us all listen with much more comprehension than we would have done without all that background information and historical setting. It was brilliant.

What seems inexplicable to me is that ever since Saturday night, I feel as if a candle has been lit somewhere deep inside me. Some creeping despair, some ennui has been entirely swept away, burned up by that strange beautiful music and those odd, passionate, allegorical characters. I could hear this piece many, many more times, and still not incorporate it all, yet every note seemed to fit (if there were wrong ones, I didn’t hear them!).

Not since I was a child has music taken me out of myself and filled me up so completely, at one and the same time. I am particularly haunted by the lullaby and the Bach chorale… well, thank you to all.

I sincerely hope you will considering trying to take this production “on the road.” It is an inspiring message for our times, in so many ways.

Listen to an interview on Co-op Radio's "Wake Up With Co-op" morning show featuring the history of "Emperor of Atlantis". Click below to hear the audio. 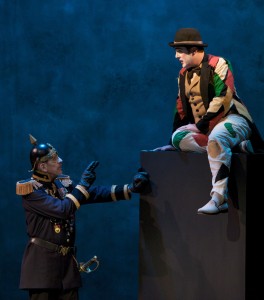