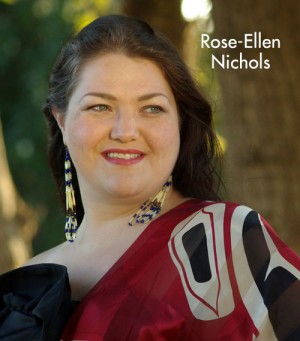 This is the opera you don't want to miss. A powerful and poignant story, lyric and memorable, bold and vivid. A world premiere.

PAULINE is the tale of a remarkable woman, a proto-Canadian who 150 years ago led a life that was unimaginable in its time.

It is a story of love and remorse, betrayal and hope. It is a Canadian story of dual identity, set at Vancouver in March 1913. The opera is in two Acts, and runs approximately two hours. Margaret Atwood and Tobin Stokes will be in attendance opening night.

Pauline Johnson (1861-1913) traveled across Canada, the United States and Great Britain giving readings of her own work when such independence was unknown. The child of a Mohawk chief and a Quaker Englishwoman, she was torn by loyalty and ambition. Pauline lived her last years among us, and died a terrible death of breast cancer, treated by crude surgery and morphine.

"Pauline will be the runaway hit of the spring." -- Max Wyman

The Canadian Press has declared that PAULINE is one of "Five buzz-worthy theatre productions for Canadians to see in 2014."

No wonder. It is Margaret Atwood's first opera. Its music is by Tobin Stokes, and is directed by Norman Armour. It is the first opera about Pauline Johnson, and the first to be produced at the century-old York Theatre on Commercial Drive.

Opening Night Gala tickets are $100, and available only by phone at The Cultch.

We have now had ticket requests from New York City, Los Angeles, San Francisco, Montreal, Toronto, Regina, Seattle and Australia. You will be among friends.

"City Opera's brilliance is in identifying stories that speak about issues both local and global, and sourcing the creative and performing artists who can move our hearts with their passionate and powerful story-telling. Pauline meets the mandate in all categories; the stellar creative and production teams are creating an important work that sings a consummately Canadian story. I can't wait to see the show!" - Rena Sharon

With it, we can keep prices down, and make this extraordinary new opera available to everybody.

Prefer to donate on-line? Please go to our account at Canada Helps.

Tickets went on sale February 16, and are moving very well. If you want the best seats, now is the time to get them. We expect Pauline will sell out.

Pauline: At The York Theatre, 639 Commercial at East Georgia

"Pauline is a project of great national significance, worth every support and encouragement. Likely, the Canadian opera premiere of the year." -- Bramwell Tovey