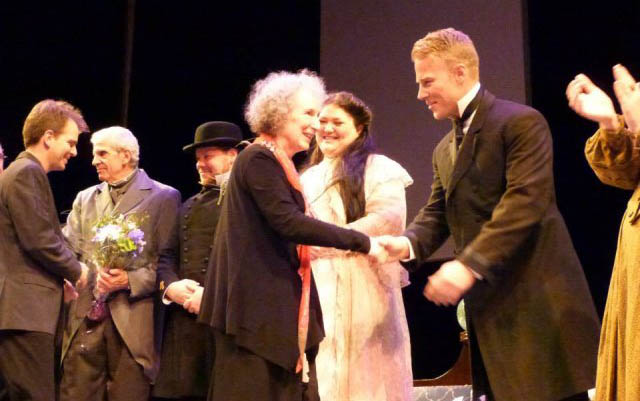 All five houses were sold out at the York Theatre, and every night saw a standing ovation.

The media rollout included full-page stories in the Vancouver Sun, the Globe & Mail, the Georgia Straight, and many more in print and electronic media — including BBC 4 and The Guardian. We are thankful to all of them, and particularly to City Opera media director Marnie Wilson. 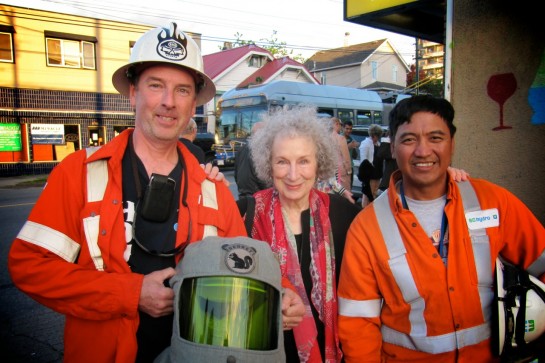 On opening night, BC Hydro conked out and downbeat was delayed to 9:30pm. We are incredibly grateful to our superb house and stage crew, to Borja, Jenn, Heather, Graham, Scott, Jayson, and John, and to BC Hydro linemen (we ended up using our own generator, and the Hydro power once restored) for rescuing the show. And we thank the audience for patience and good humour during a long, long wait.

We are forever grateful to the many talented people who worked on every aspect of this production, and to the dozens of friends and supporters, the agencies and foundations and companies and governments, who gave us the means to do so. Our most special thanks go to Margaret Atwood, Tobin Stokes, Norman Armour, to co-producers Nora Kelly and Janet Lea, and to the singers and players who made such compelling music. Incited by an exceptional team of directors and designers and technicians, everyone made wonders.

We have now received requests to take Pauline to Victoria, Kelowna, Regina, Québec City, Long Beach CA, and Rochester NY — and to re-mount it in Vancouver. More news to come.

We have posted a PDF of the complete Pauline programme book, online. It was designed by Sara Bailey, edited by Harvey De Roo, and printed by Contact Printing in North Vancouver. Our thanks to all.

Italian Day on The Drive 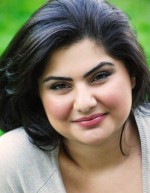 Members and friends of the City Opera of Vancouver Society are cordially invited to attend our seventh Annual General Meeting. We will be featuring music from THE LOST OPERAS OF MOZART, with guest artists Bahareh Poureslami, soprano (pictured), and Sean Bayntun, piano.

In the coming season we will be appearing in the DTES Heart of the City Festival, the Homeground Festival, and at the Carnegie Centre, among many other arenas.

YOUR INVITATION: on Thursday 20 November, at 7pm, we follow the great success of last year’s Viva Verdi! with our new Puccini à Piacere, in co-pro with our friends and partners at the Italian Cultural Centre. Please join us for a wonderful evening of Puccini and prosecco.

And a word from our friends...