Kaufmann Means Something… But It’s Not Entirely Clear What 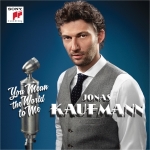 Judging by the cover art, everyone wants to be Michael Bublé these days.

The new cross-over album by tenor Jonas Kaufmann is a curiosity. You Mean The World To Me is an homage to the music of Berlin during the heyday of the Weimar Republic, minus the cabaret.

In English and German, it moves from repertoire associated with the renowned Richard Tauber to the tragically short-lived Joseph Schmidt, from the inevitable Stolz to Kalman, from the rare to the remote.

The arrangements are equally curious. Some are almost absurdly over-blown, and others intimate and revealing. Some are declared ‘reconstructions’ and others appear to be originals from the composer himself. Although the selections are “hand-picked” by Kaufmann, the album overall seems to have been the work of seventeen producers – or none.

Aided by the splendid soprano Julia Kleiter, and led by conductor Jochen Rieder with the Berlin Radio Symphony Orchestra, it is a recording of high technical accomplishment but odd emotional compass. Kaufmann is in typically strong and eloquent voice, and rewarding as ever – but the album presumes a greater foreknowledge of the repertoire and the era than is likely to be found in a North American audience. It certainly taxed mine. Fair enough. But…

Any album that moves from Korngold’s Die tote Stadt to Lehár’s Land of Smiles is either concerned only with the journey, or not at all with the destination. This is, perhaps, a recording that will be of special interest many years after the close of a great tenor’s career, and invariably accompanied by the question, “What was that all about?”

Lengthy liner notes by Thomas Voigt try to answer it, without complete success.