We welcome Jeremy Stewart as our new General Manager.

Jeremy's management and fundraising experience includes work with Theatre North West, and service as General Manager of the Prince George Symphony Orchestra. In 2013 he founded Casse-Tête, an annual festival of experimental music held in Prince George, for which he received the inaugural Barbara Pentland Award for Distinguished Contribution to Canadian Music from the Canadian Music Centre.

Stewart is also the author of two trade collections of poetry: (flood basement (Caitlin Press 2009) and Hidden City (Invisible Publishing 2014), which won the Robert Kroetsch Award for Innovative Poetry. Jeremy holds a Master of Arts in English from the University of Northern British Columbia.

In September we give the Vancouver premiere of the legendary Nigredo Hotel – a bizarre, macabre and astonishing operatic thriller. It is unlike anything we have done before. Tickets on sale after 15 June.

Nigredo Hotel tells of an encounter between a beautiful but crazed woman who runs a shoddy hotel, and a brain surgeon who takes refuge there after he crashes his car.

Raymond and Sophie are two of the most unusual characters in 20th C opera: brilliant, dazed, lonely, each possessing great insight into the other but little into themselves, sarcastic and corrosive, funny and combative, dazzling and daring, lunatic and often lovely. These are two remarkable roles, telling three remarkable stories: hers, his, and theirs. You can't imagine what happens next. 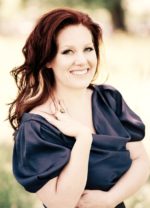 Well known to Vancouver and Victoria audiences, acclaimed for her “emotional yet unaffected quality of performance, with true clear voice”, soprano Sarah Vardy has impressed and delighted audiences across Canada, Europe, Mexico, and China. “She stands out wherever she sings, with a combination of vocal passion and rich characterization and musicality”. Her European debut of Tosca was “Victorious” and she continues to “convey deep emotion and rich and unique vocal tones.” Performing opera, oratorio, small and large concerts, Ms Vardy has sung with the Opera Wroclawska (Poland), Regina Symphony Orchestra, Saskatoon Symphony, Highlands Opera Studio, Calgary Concert Opera, Saskatoon Opera, Pacific Opera (Victoria), City Opera Vancouver, and members of the Victoria Symphony.

She has performed La Gioconda with Calgary Concert Opera. This season she sings Mendelssohn’s Elijah and Mozart’s Requiem, and performs various opera works in two concerts for the Mexican community Los Cabos. Ms Vardy debuted the role of Eva Johnson in Pauline by Margaret Atwood and Tobin Stokes, described by Opera Canada as “sung with catty, self-righteous intensity -- just what the part needed”. 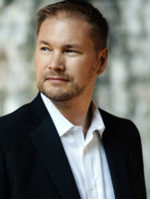 Long a Vancouver favourite son, baritone Tyler Duncan recently performed at the Metropolitan Opera as Prince Yamadori in Puccini’s Madama Butterfly. At the Spoleto Festival he debuted as Mr. Friendly in the 18th-century ballad opera Flora, returning the next season as the Speaker in Mozart’s The Magic Flute. Other appearances have included the role of the Journalist in Berg's Lulu and Fiorello in Rossini's Barber of Seville, both at the Metropolitan Opera, Raymondo in Handel’s Almira with the Boston Early Music Festival, Dandini in Rossini’s La Cenerentola with Pacific Opera Victoria, and Demetrius in Britten’s A Midsummer Night’s Dream at the Princeton Festival. 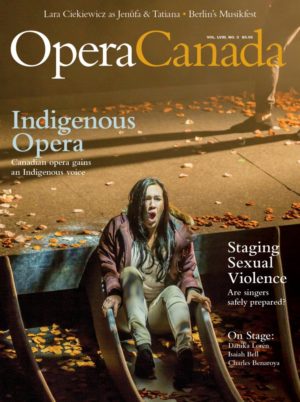 Missing is the cover story in the February 2018
issue of Opera Canada magazine.

As well as commissioning new chamber opera, and giving mainstage productions, City Opera presents concerts and special events year round. With new support from CREATIVE BC, the Province of British Columbia, and Metro Vancouver, we are expanding the series.

with many more to come. Please join us. Our thanks to Curator Alan Corbishley. 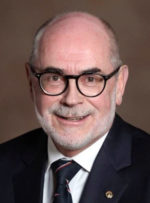 City Opera is blessed with extraordinary volunteers. They serve on our Board, our committees, our outreach projects, and backstage at our concerts, special events, and mainstage productions. Their good work and good will is essential to us.

Derwyn Lea is a Professional Engineer, now retired from a career as project director of “big industrial stuff”. He has been passionate about music ever since singing bass in his first Messiah at 16 years of age. Extracurricular activities have included membership in several fine choirs over the years (but no opera). Other passions include a life on the water – owning sailing vessels for 30 years and latterly power boats for eight years. Whichever boat of the day enables Derwyn and Janet to access their beloved cabin – another passion - on DeCourcy Island (some of you will have heard of this small Gulf Island?).

Derwyn has enjoyed pro bono (Board) work off and on for many years – mostly for arts organizations. His most recent foray was a six-year stint on the Executive of Eagle Harbour Yacht Club, culminating in the rewarding position of Commodore in 2017. After several treasurer positions in the past, Derwyn recently adopted the mantra “just say no to financial roles”. That proved successful - until now! Ah well – the things one does for love…