Nigredo Hotel now open for you 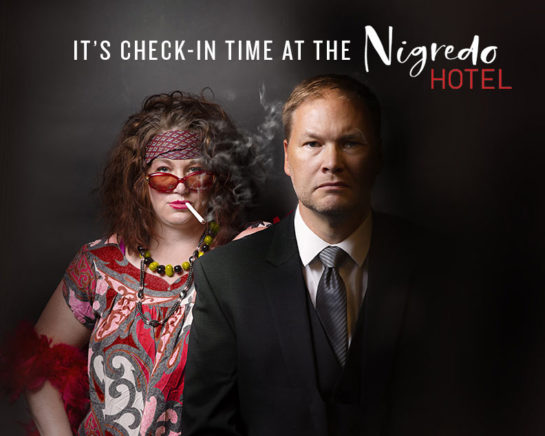 Nigredo Hotel is a bizarre black comedy, an operatic thriller, and a project unlike any we have done before. It stars baritone Tyler Duncan and soprano Sarah Vardy, and is directed by Alan Corbishley.

The Hotel is startling, lyric, jazz-inflected and improvisational — with a four-player combo onstage. It has become a modern Canadian masterwork. You'll soon know why.

By Ann-Marie MacDonald
and Nic Gotham

September 20, 21 and 22, all at 8pm
at The Historic Cultch Theatre
Victoria x Venables

With a new program note by Ann-Marie MacDonald

With music by Nic Gotham and libretto by Ann-Marie MacDonald, it depicts an encounter between a beautiful but crazed woman who runs a shoddy hotel, and a brain surgeon who takes refuge there after he crashes his car. It is brilliant combat between two of the most unusual characters in 20th-century opera.

It is strong opera, first to last, both vivacious and utterly engrossing.

“Nigredo made a big impact on the Canadian opera scene. It played to non-traditional audiences (at the Tarragon Theatre, no less), and proved that you didn't have to break the bank to do something topical and original. It won awards and traveled to Britain. It made chamber opera seem hip.” — Robert Everett-Green, The Globe and Mail

Lighting and sets by John Webber, costumes by Barbara Clayden, sound design by Malcolm Dow – and inspiration from Carl Jung.

NB: There are brief haze and strobe effects.

We hope you check in at Nigredo Hotel next week, and thank you for reading this.

NEXT: A brilliant but troubled brain surgeon. An unusual hotel. A remarkable opera. →