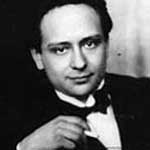 Viktor Ullmann was a pianist, choirmaster, conductor and music critic, born on January 1st 1898 in Těšín, (on the Czech Republic-Poland border) where he also began his musical studies. He died at age 46 in Auschwitz.

From 1914 Ullmann lived in Vienna, and between 1918 and 1919 studied in Schonberg’s composition classes. From 1920 until 1927 Ullmann was one of Alexander Zemlinsky’s assistants in the New German Theatre in Prague (now the State Opera Prague). Artistic collaboration and long-time personal friendship with Zemlinsky provided Ullmann with a wealth of personal and artistic experiences. In the season 1927-28 he served as head of the opera company in Ústí nad Labem. Together with local and invited artists, Ullmann managed to stage a truly impressive repertoire (including operas by Richard Strauss, Krenek and others).

He also became involved in the anthroposophic movement, his new-found interests taking him to Zurich and later to Stuttgart. Nazi persecution forced Ullmann to leave Germany in 1933 and so returned to Prague, embarking on the uneasy road of a freelance musician. He worked with the department of music at Czechoslovak Radio, wrote book and music reviews for various magazines, including the Prague-based Bohemian newspaper, lectured to educational groups, gave private lessons and was actively involved in the programme of the Czechoslovak Society for Music Education. At about that time Ullmann made friends with the composer Alois Haba. Ullmann enrolled at Prague's Conservatoire of Music and studied there with Haba and others for two years (1935-1937).

Viktor Ullmann was a leading figure in a circle of Czech and German friends for whom he gave private music performances, chamber concerts, and parties. On September 8th 1942 Viktor Ullmann was deported to the Theresienstadt ghetto. Even in such extremely difficult conditions he succeeded in maintaining artistic activity.

Together with Karel Ançerl (who would become conductor of the Toronto Symphony Orchestra), Rafael Schachter, Gideon Klein, Hans Krasa and others, he wrote a glorious chapter in the camp’s cultural life. Ullmann was deported to the Auschwitz death camp, where he died in a gas chamber, probably on October 15, 1944.

Only part of Viktor Ullmann's work has been found so far. Before the outbreak of the Second World War Ullmann wrote some forty works, mostly orchestral, chamber and piano, and two operas. In stylistic terms, Ullmann’s early compositions bear traces of Schönberg’s influences; his works from the 1930s are polytonal in the classical formal framework, while Mahlerian inspiration is discernible in Ullmann’s remarkable songs. Der Kaiser von Atlantis is, beyond question, his masterpiece.