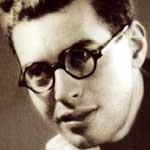 Frantisek Petr Kien was born in Varnsdorf, Czechoslovakia on January 1, 1919, and died at the age of twenty-five in Auschwitz, October 1944.

His visual and literary works reflected his experiences in the concentration camp at Theresienstadt (Terezin), where he too was imprisoned during World War II. Kien's watercolour drawings, created in secret on stolen paper, vividly depict the brutality of daily life in a camp the Nazis portrayed to the world as a “model Jewish community”. As an author he is best known for his libretto for The Emperor of Atlantis. Much earlier he studied in Brno, and entered the Prague Art Academy in 1936. He continued to study privately after the Germans shut down Czechoslovakia's universities and art schools in 1939, and found inspiration in Expressionism and Kafka.

In December 1941 Kien was deported to Theresienstadt. Assigned as a draftsman to the “Technical Office of Self-Administration”, he took part in the camp's bustling cultural scene by sketching portraits and writing poetry; his documentary drawings, shown only to a trusted few, would have gotten him shot had they been discovered.

Kien's verse cycle Town of Plague (1943) and satirical play Puppets (1943, now lost) led to an invitation from composer Viktor Ullmann to collaborate on The Emperor of Atlantis. Accounts differ, but it may have received one rehearsal in the spring of 1944 before being banned for its veiled attack on Hitler.

The author and Ullmann decided their next project would be an opera about Joan of Arc. The Nazis decided otherwise. On October 16, 1944 Kien, his wife and parents were among the thousands put on a transport to Auschwitz. He was not sent to the gas chambers but died from disease, probably typhus, at the end of the month. He was 25. His family also perished.