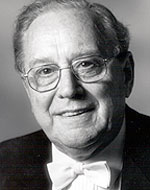 Sir Charles Mackerras, CH, AC, CBE, is one of the most distinguished conductors of the modern era. He received a CBE in 1974 and was knighted for his services to music in 1979. In 2003 he was named a Companion of Honour in the Queen's Birthday Honours. In 2005, he was presented with the Royal Philharmonic Society Gold Medal, and was also the first recipient of the Queen’s Medal for Music.

He has long been associated with the world’s great orchestras and opera houses, including Covent Garden, The Met, San Francisco Opera, the Berlin Philharmonic, the Czech Philharmonic, and more. His discography numbers over 400 titles, and covers a breathtaking range of styles and periods.

We deeply regret having to advise that Sir Charles passed away today, in London, at age 84. He was a tremendously gifted musician, and a great friend and mentor. He will be missed terribly by all who had the honour of his friendship.

He is survived by his wife Judy, and their daughter Cath. He was predeceased by their daughter Fiona. Sir Charles suffered from a severe vertigo for many years, and cancer for three years, but was able to conduct Mozart's Così fan tutte a month before he passed.

This was amazing -- unless you knew him.

There is a new biography, 'Charles Mackerras', now available. An anthology of critical and biographical writings, together with essential information about Sir Charles' own scholarly performing editions of Mozart and Janacek, it has been edited by Nigel Simeone and John Tyrell. The first reviews are excellent.