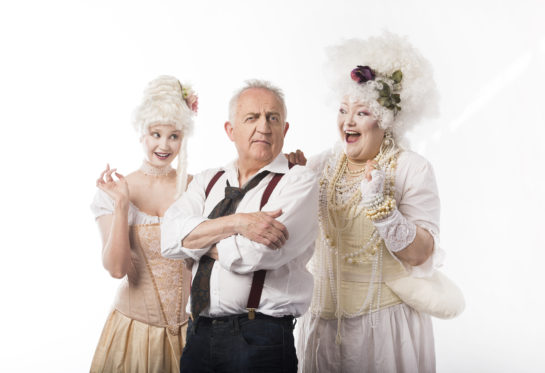 The Lost Operas of Mozart was presented on
27, 28 and 29 October 2016 at Christ Church Cathedral.
Click here to download the program.

In his early twenties, Mozart started three operas he never completed. Two are Italian comedies, and the third is a German Romance. Each was a tantalizing hint of what might have been. Each was the voice of Mozart himself.

This re-construction was a Canadian first. In two acts and three hours, The Lost Operas of Mozart delighted, informed and enchanted. Stage direction and production concept was by Alan Corbishley, original script by Maria Reva, and the work set in our own time at the Gates of Limbo.

All of this was based on the original scholarship of Raphaël De Vos, John Drummond, Jane Oakshott, and Richard Rastall. We thank them all for permission kindly granted to use and adapt these materials.

Thanks to the Edwina and Paul Heller Memorial Fund, we met their $25,000 challenge and had that sum doubled. Our thanks to all who made it possible.

This is precisely the kind of inspirational thinking that is establishing City Opera as such an essential thread in Vancouver’s (and Canada’s) cultural fabric. Three “lost˝ bites of Mozart, rethought for modern audiences and packaged into a single evening – it promises to be a revelation and an inspiration filled with unexpected delights. Bravo to City Opera: an irresistible force of vitality and enlightenment.
— Max Wyman